Eleven Men and a Girl is recommended viewing more as a curiosity than anything else. While Joan Bennett, Joe E. Brown and James Hall are the top billed individual players in this 1930 Warner Brothers' college musical-comedy directed by William Wellman, the gimmicky draw is actually billed above the title: The All-American Football Eleven. Or, perhaps, the focus should be placed squarely on the original title of the film, Maybe It's Love, one of the top-selling songs of 1930, which is not only spun on a record player but is also sung on separate occasions by both Bennett and Hall in Eleven Men and a Girl. 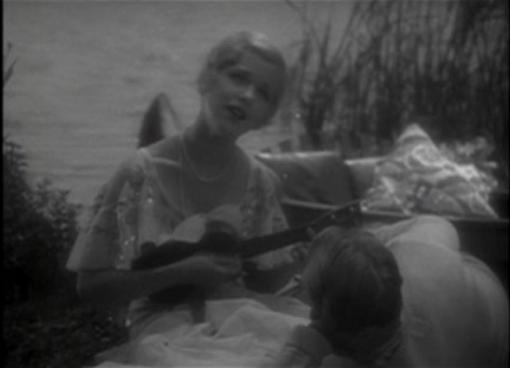 Unless you're a big football fan the entire reason to watch Eleven Men and a Girl eighty-plus years later is the chance to see 20 year old fair-haired Joan Bennett, who provides plenty of visual variety through endless costume changes but sounds like she's got other things on her mind when delivering her lines. Bennett's career path is very interesting to chart, and no one charts it better than Brian Kellow in his 2004 biography of the entire Bennett bunch, The Bennetts: An Acting Family

. Joan and sisters Constance and Barbara came from an acting family whose patriarch, Richard Bennett, was recognized as one of the most important actors on the stage in their formative years. The sisters actually share a film debut in one of father Richard's projects, The Valley of Decision (1916), at which time Joan, the youngest of the girls, was just five years old.

Joan would have a small part in another of Richard's films, The Eternal City (1923) starring Barbara La Marr, before entering married life and to the best of her knowledge at that time leaving her movie career behind her. Well, that first of four eventual marriages, entered into at age 16 by Joan, blew up around the time of the birth of her first child, Adrienne Ralston Fox, in early 1928, leaving Joan without means of support. Father Richard managed to get her a role in a Broadway play that he was appearing in, but under the condition that she divorce her husband. Pretty much destitute, Joan had no choice but to comply.

The play, Jarnegan, was a success, running 136 performances, and its timing happened to coincide with Hollywood's search for stage actors to populate the early talkies with strong voices. Samuel Goldwyn, who'd had positive experiences working with both Richard and Constance Bennett, sent Joseph Schenck, chairman of United Artists who was distributing Goldwyn's films, to New York to have a look at Joan, resulting in a five year deal for Joan and a part opposite Ronald Colman in his talkie debut, Bulldog Drummond (1929).

While Bulldog Drummond did well enough, Joan's next picture with United Artists, Three Live Ghosts (1929), did not and her option was dropped by the studio. Warner Brothers would cast her in Disreali (1929) which won star George Arliss the Academy Award for Best Actor and garnered some acclaim for Joan, who next worked in a few lesser films just for the paycheck. Kellow writes that after appearing in the hit Moby Dick (1930) opposite John Barrymore for Warner's, Joan would opt for steady work and sign a long term deal with Fox in mid-1930.

Maybe It's Love/Eleven Men and a Girl is of such little consequence that it's not even mentioned in "The Bennetts," however it was a Warners' release just after Moby Dick and immediately before her first Fox film. While sister Constance was Queen of RKO-Pathe and swinging a deal with Warner Brothers on the side to earn an incredible $30,000 per week during vacation from her home studio, Joan was more or less treading water until she scored a breakout role in Little Women (1933) at RKO.

In Eleven Men and a Girl, Joan plays Nan, daughter of the Upton College President (George Irving) and an active presence on the campus. When we first see Nan she's dressed conservatively and wears glasses, but after Upton star footballer Speed (Joe E. Brown) accosts her on the heels of a big loss he convinces Nan to shed her specs and use her looks to recruit some star players for next year's team. The next part of the film sees Speed set up a few situations for Nan to come into contact with the College All-Americans, all playing themselves, and promise herself to each of them along the way as long as they come play at Upton.

All of the real football players are sold by Nan's Upton pitch but Eleven Men's fictional football star, Tommy Nelson (James Hall), has an interfering rich father (Anders Randolf) who won't let his boy join Upton without assurances of his being passed through academics. Nan's father, ignorant of all of her recruiting on the side, won't go that far, and the Nelson's leave with plans to play for Upton's chief rival, Parsons, the team that the Upton powerhouse is being built to beat. On the way off the campus Nan goes out of her way to bump into Tommy and while she begins using her charms as she did with all of the other star players the difference here is that Nan really falls for Tommy and the feeling is mutual.

Tommy comes to Upton under an assumed name and all is well until he and the other players come to realize Nan has promised herself to all of them. This leads to some harsh feelings, threats of not playing the big game, and some pretty obnoxious lines to Nan from Tommy ("You don't want one man, you want a whole team"; "This college is too small for you, you should have joined the Navy."). But the title tune, Maybe It's Love, is soon playing and all is well, that is until Tommy's father gets wind of what's going on and rushes off to Upton to try to break up the big game himself.

Young Joan Bennett is dazzling to watch but doesn't make much of an impression at all when she opens her mouth. That said, her acting shines in comparison to the football players, most of whom fall into that so bad it's funny range. Joe E. Brown is up to his usual shenanigans throughout though he's on the scene less than you might think. He has a pretty humorous, almost romantic, episode with a bear and I have to admit getting a chuckle out of his drawn out Upton rallying cries throughout the climax of the film, most of which he spends locked in a basement prison with Tommy's father.

Joe E. Brown after a tumble

James Hall was 29 seemingly going on 35 at the time of Eleven Men and a Girl and comes off as a harmless college type of the period--think William Haines with a receding hairline. Hall did grate on me with his repeated requests of forming a huddle with the real players in order to privately talk over matters, but I'd imagine this is one of those corny little touches that amused Wellman so he decided to include Tommy's huddle a few times throughout Eleven Men and a Girl. I love Wild Bill, but I've noticed he is prone to not only a little corn, but beating you over the head with the cob once in awhile.

Great nostalgic piece for fans of football history and an excellent opportunity for classic film fans to bask in Joan Bennett's beauty for an extended period of time, but not a whole lot else to recommend it.